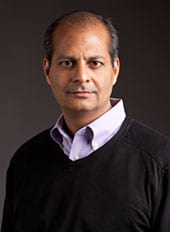 Hemanshu “Hemu” Nigam has worked inside the largest prosecuting agencies, software companies, media and entertainment giants, and most influential trade associations in the world.

Hemu served as the Chief Security Officer (CSO) of News Corporation and Fox Interactive Media’s digital properties, as CSO of MySpace, and as a security executive in Microsoft. He was also the Vice President of Worldwide Internet Enforcement at the Motion Picture Association of America. He began his career as Los Angeles County prosecutor specializing in sex crimes and child abuse before serving as a federal prosecutor against online crimes against children and computer crimes in the US DOJ.

Today, he is also the founder of SSP Blue (www.sspblue.com), a cyber security advisory company that has helped companies like Participant Media, SnapChat, Microsoft/Xbox, Disney, AT&T, Microsoft, JustFab, and others deal with challenges in cyber security, privacy, and safety. His company conducts cyber assessments, crisis public relations, and legal and government affairs work for clients. Hemu’s been a keynote speaker at the United Nations on stopping cyber hate, and has been a member of the White House’s cyber stalking task force, and co-chair of President Obama’s Online Safety Technology Working Group.

Hemu’s spent a career chasing bad guys online and offline bringing them to justice. He was one of U.S. DOJ’s first online crimes prosecutors who took down an international child sex trafficking ring as well as prosecuted online child predators and hackers.

Hemu’s insightful expert commentary on cyber security offers an insider’s view of the dark online underworld. His personable style coupled with his unique ability to simplify cyber security for viewers to understand makes him a frequent guest on CNN, FOX, NBC, CBS, and other national news outlets. He’s also often interviewed by Variety, Deadline, The Hollywood Reporter, the New York Times, the Washington Post, and the Los Angeles Times. He’s also got his own video blog at www.InsideCyberCrime.com where he breaks down cyber security, privacy, and safety topics in short, easy news you can use video segments.

He earned his juris doctorate from Boston University School of Law and his bachelor’s degree in government and political theory from Wesleyan University. Hemu is bar licensed in the states of California and Washington.